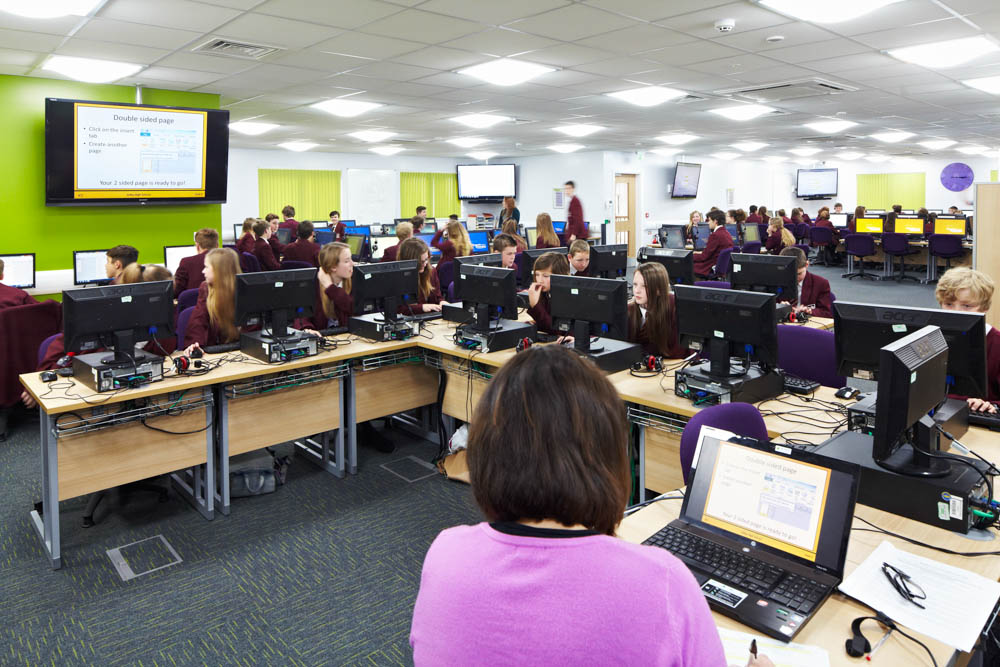 As a Specialist School for The Arts and Science, Selby High School is a thriving, successful community and one of the town’s proudest assets. Founded more than a century ago and dedicated to excellence across the curriculum, the historic school is achieving outstanding GCSE results, consistently above the national average.

A major new investment in computer teaching has now taken the school to the forefront of interactive classroom technology, thanks to cutting edge display and control systems installed by AV/IT integrator Saville Audio Visual.

ICT lessons were formerly held in an external rear annex that was difficult to keep cool in summer and hampered by restricted natural light. Despite weight bearing restrictions on building upwards, an ingenious solution saw a complete new floor added, by suspending the room from the cantilever roof.

This created a large, versatile space with excellent natural light – now equipped with a true state-of-the-art computer teaching system that will be the envy of schools throughout the region and beyond.

The Hemingway Suite - named in honour of long serving ICT manager Malcolm Hemingway – houses 100 PC stations in three distinct areas, identified by screen savers in green, yellow and blue. The room can be used for simultaneous sessions - for three different year groups if required - or for a total classroom lesson for up to a hundred.

To consolidate the interactive potential of the room, Saville installed six 60” Sharp LED screens (some with powered sound bars), two in each room section with a seventh screen fitted to cover a dead spot in the central section. The physical layout also enables virtually all the monitors to be seen from this central area.

Saville technical manager Steve Gore-Browne said: “Control is provided by an AMX system using an iPad, with a Saville-programmed Graphical User Interface. There are six input locations and any PC connected at these points can be sent to any or all screens via a HDMI matrix switcher. Apple TV is also included.”

Using a laptop PC or an iPad, the teaching team can watch students’ screens and display any on one or more of the big screen monitors. They can also talk privately to any student via on-screen text.

Deputy Headteacher Mr Lewis said: “The suite is designed and furnished to a high professional standard, to simulate a modern office environment. We hope it will help students develop the sense of personal responsibility and independence needed for the world of work.”

Subject leader of ICT, Mr Martin added: “The facility has made for happy, productive lessons but that can sometimes lead to a rise in noise levels. We have an ingenious iPad app that displays a visual ‘soundometer’ on screen. Those who respond and keep the chatter down win reward points – it works a treat!”